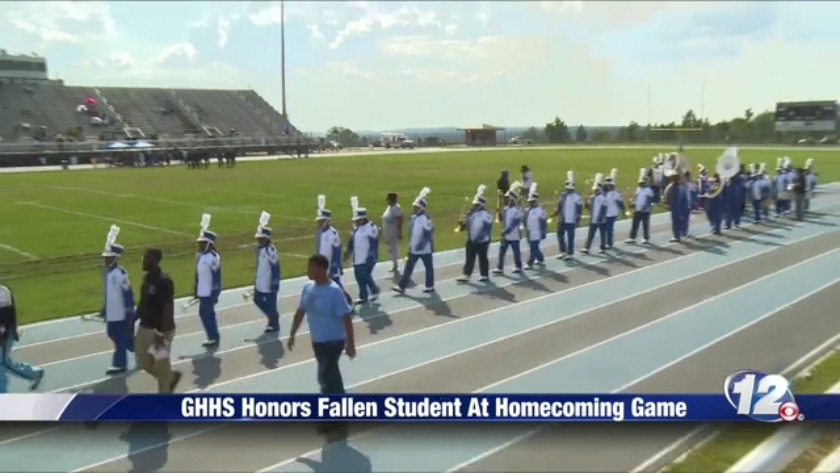 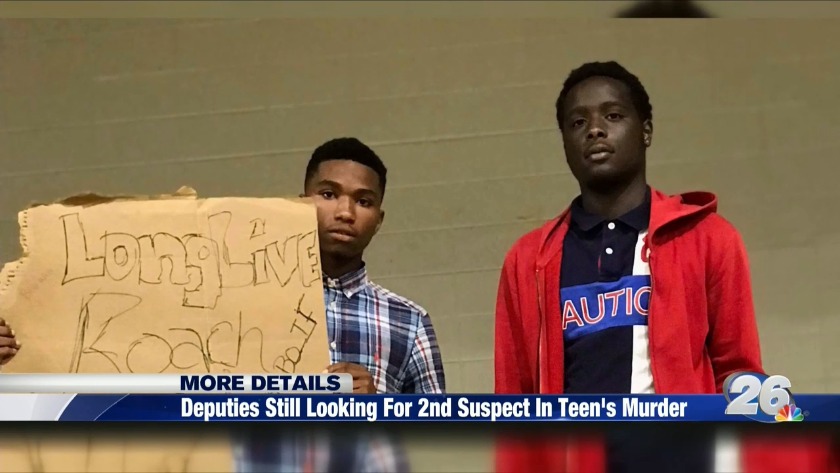 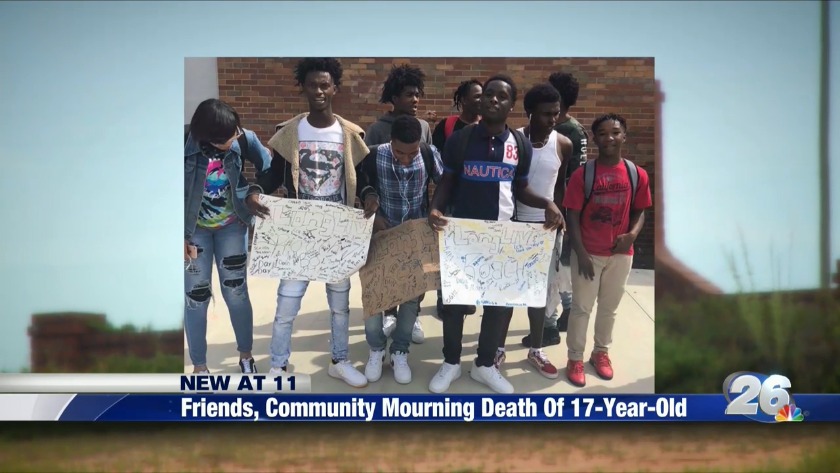 Friends of Roach speak out 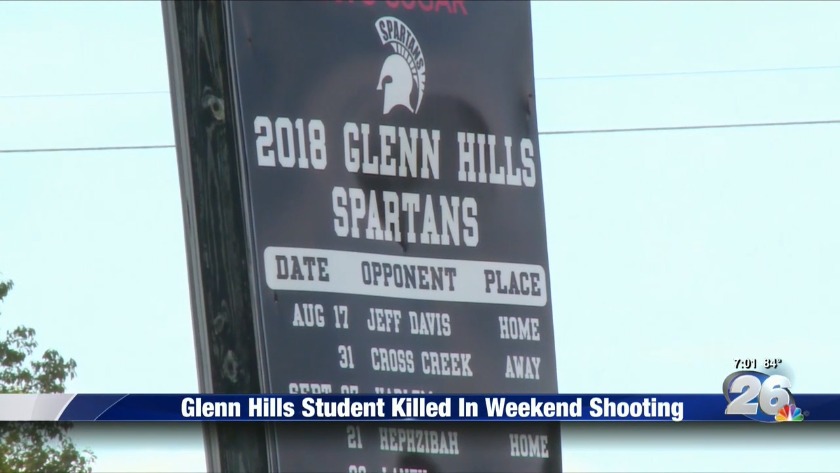 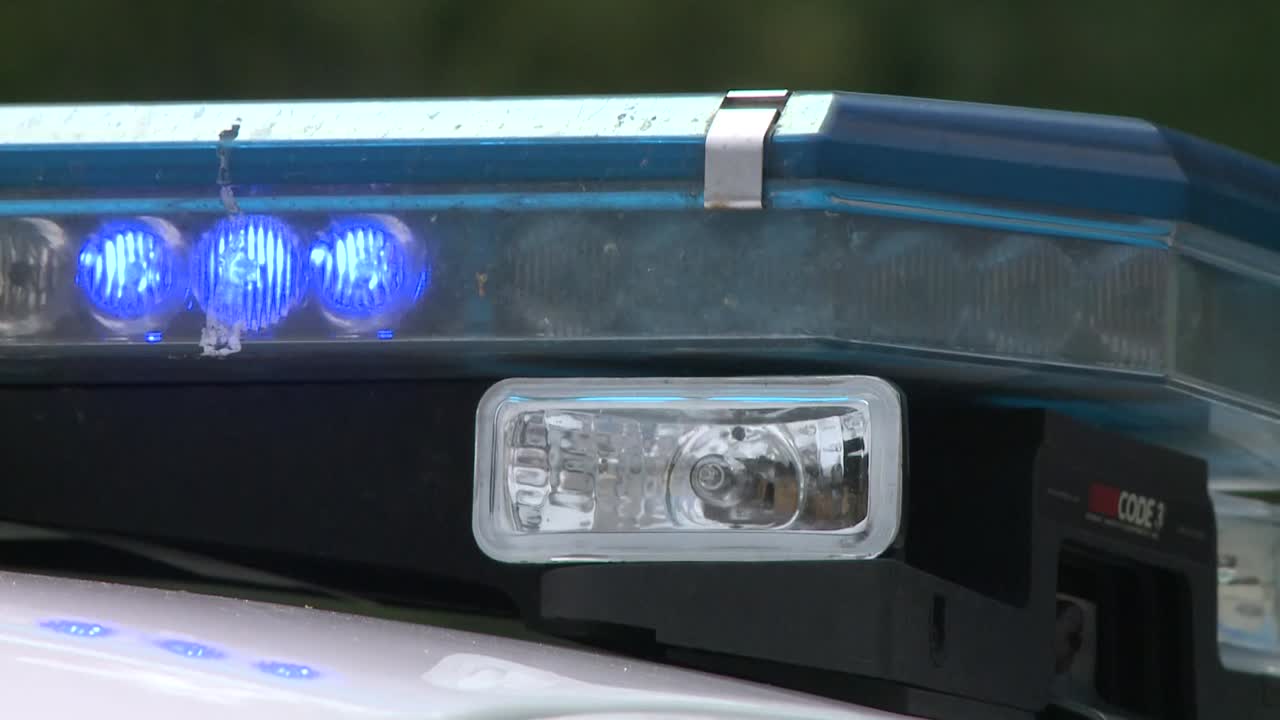 Arquette Jones and Nigel Robinson are both charged with Malice Murder, Felony Murder, and Possession of a Firearm During the Commission of a Felony.

Jones will live with his mother and is not allowed to have any contact with 18-year-old Nigel Robinson, who is the second defendant in this case.

Robinson has not been granted a bond hearing yet.

Those words, echoed through the bleachers at the Glenn Hills homecoming game. A game filled with students, but feeling empty in the absence of one.

"We would like to let him know... that every step we take, every move we make, we'll be missing you"

"Just put the guns down and fight," Terez White, Roshawn's brother said. "If they wanted to fight, they could've just fought. They didn't have to shoot him."

In a big family with 10 brothers, he says they can't believe this is their reality.

"We're really close," Terez said. "After we come from work and practice and all that for school, we just have family time. We'll go in one spot and just talk about what we did."

He says his brother was a good kid. He had tons of friends and he was in the marching band. But, instead of marching at his own senior year homecoming, his classmates had to march for him. They released balloons in his honor.

"Sometimes I just go by myself and I just start crying," Terez said.

"He was our band comedian. Very silly," Trevor Latimore, White's Band director said. "He kept the band going and just kept the band in good spirit. Whenever you were having a bad day, he would definitely make you smile. That's one thing that I'm going to truly miss about him. I wish he was here."

Mr. Latimore says he was more than just a band director to Roach. He talked to him every day to keep him on the right path.

"It's tough. It was a very unfortunate situation," Latimore said. "I was one of the ones that was trying to help him just stay on track and do the right thing. Just try to get to that goal towards graduation."

In a community where gun violence happens all too often, the love shown today for Roach, that's rare.

"Matters can be handled other different ways other than using a gun on somebody," Latimore said. "That's one thing that teens need to realize. Guns... it's a dangerous game."

AUGUSTA, Ga. (WRDW/WAGT) -- 16-year-old Arquette Jones was in court Friday morning for a hearing. The judge read him his rights, but because of the charges he is unable to set bond in the case.

Next for Jones will be a bond hearing in superior court.

News 12 has also learned that Nigel Robinson turned himself in Thursday night.

Robinson will not face additional charges for being on the run the past few days since the shooting.

AUGUSTA, Ga. (WRDW/WAGT) -- The Richmond County Sheriff's Office says the second suspect wanted in connection for the shooting death of 17-year-old Roshawn White has been located.

Law enforcement say Nigel Robinson had two warrants for his arrest. One for murder and the other, possession of a firearm during the commission of a crime.

AUGUSTA, Ga. (WRDW/WAGT) –"He came to see me Sunday morning. He came by my house," Joseph Berrian said.

Joseph Berrian never expected that to be the last time he would see his friend. The incident report says, just a couple hours later, "the Richmond County Sheriff's Office responded to shots fired with one person, Roshawn White being injured."

"I don't know why," Joseph said. "I didn't believe it because I don't know why would somebody try to do that to Roach because Roach never messed with nobody."

"There so many people out here, why would you take that one that people love most," Joseph asked.

Thanks to an eyewitness and security cameras at S&S, investigators say they were able to "link Nigel Robinson and Arquette Jones as being the individuals who shot White after they attempted to rob him of whatever he had," including a bag he was carrying. Investigators say, "there was a struggle over the bag before the shooting started." The warrant says one shot was to the chest and one to his right arm.

"I was at a loss for words, I didn't know what to say," Joseph said. "I broke down one time in class, 3rd period."

Joseph says Roshawn was someone he was close to and someone who always kept him laughing.

Joseph says he also knows one of the suspects, Arquette Jones, the one now in custody. But Nigel Robinson is still out there.

"Somebody needs to catch him," Joseph said.

Investigators are still looking. Nigel Robinson has two warrants for his arrest. One for murder and the other, possession of a firearm during the commission of a crime. Both those charges are felonies for that 18-year-old still on the run.

AUGUSTA, Ga. (WRDW/WAGT) – An outpouring of blue hearts cover Facebook in memory of the Glenn Hills student shot and killed.

"Roach, out of all people, not roach," Jaquain Patterson said.

Roshawn White, better known as Roach, murdered at only 17-years-old.

Jaquain Patterson is a close friend. He went to Glenn Hills High with Roach. Friends say school today wasn't the same without him.

"I got third period with him," Patterson said. "School, class don't even feel the same. It's all quite and people are in there crying."

"It don't feel the same, it's boring," another friend, Destiny Burns said.

A witness says the 17-year-old ran into the gas station where she was working, bleeding from a gunshot wound, screaming he was dying.

Two suspects have been identified, but only one caught and in handcuffs. 16-year-old Arquette Jones is the one teen in custody, while Nigel Robinson is still on the run. Investigators say her should be considered armed and dangerous.

"It ain't right," Patterson said. "I feel like they just need to put down these guns, get some money."

Both Patterson and Destiny Burns know the two suspects.

"Why? Why did they have to do it?," Burns asked. "How do you take somebody's life away and you knew him too."

In the end, these friends just want justice. Patterson says he only has one thing to say to the suspect still on the run.

AUGUSTA, Ga. (WRDW/WAGT) – A community and school are mourning the loss of one of their own after a deadly shooting on Barton Chapel Road. Worse yet, one of the suspects remains on the run Monday afternoon.

Posters are up at Glenn Hills High School donning the words, “long live Roach”. The posters were placed around the halls Monday to remember 17-year-old Roshawn White.

Dr. Lamonica Hillman is the assistant superintendent for student services in Richmond County. She says the school is doing what they can to help students cope.

Dr. Hillman says the school board started prepping and planning what to do for students this week as soon as they got the call about White.

"We have a crisis team that we employ when we have a loss at a school like this."

Investigators say White was shot Sunday just before noon on Barton Chapel Road, in front of the S&S Food store. He was taken to AU Medical Center, where he later died.

Now the school board is focusing on helping classmates affected by his death.

"We provided the extra resources there during the day who needed to talk or needed a little counseling."

Dr. Hillman says the counselors can help the students understand what they're feeling in times of grief.

“They don't always understand loss, and they definitely don't understand grief, and the way that it works so our strong school counselors have schools in those areas and they're there just for that reason."

The sheriff's office says 16-year-old Arquette Jones and Nigel Robinson are responsible for White's death. Jones is behind bars, but deputies are still looking for Robinson as a community mourns the loss of Roshawn, also known as “Roach”.

"This is a loss for that whole community and our district believes in family and they're part of our family so we need to be sure we're providing what they need."

The school board says white was in the band at Glenn Hills, and the band will be honoring him at the game this Saturday with a song.

Those attending the game are asked to wear blue to honor the teen.

According to deputies, 16-year old Arquette Jones was taken into custody and has been charged with murder. He is currently being held at the Richmond County Youth Detention Center.

Deputies say the second suspect has been identified as Nigel Cordarious Robinson.

They say he is presently at large. Robinson is considered armed and dangerous.

AUGUSTA, Ga. (WRDW/WAGT) -- 11:00 p.m. Patrick Collier says he was shocked at what he witnessed on Barton Chapel Road.

"He was just laying down. He wasn't moving, he was non-responsive. Wasn't moving. At all," Collier said.

He saw that person on the parking lot as he was pulling up to S&S Food Store just before noon. That's when police arrived.

"The police was standing by the door and the ambulance and paramedics pulled up," Collier said. "They start ripping the shirt off and that's when I could see the blood from up on his chest down."

The store owner says she heard gunshots and the man yelling. He then ran inside, bleeding, asking for help. That's when police arrived.

"The police told us to turn around and everything. I just started praying for him," Collier said.

The victim was taken to AU Medical Center where he died at about 1:00pm. Investigators continued searching and Patrick, also searching, for some peace.

"It makes me feel strange because we shouldn't be that way towards each other," Collier said. "We shouldn't be killing each other, we should be trying to help each other. Teach them to go to school, so they can get grown, get a job and take care of their families."

6:50 p.m.
The Richmond County Coroner has identified the victim of a fatal shooting on Barton Chapel Road as 17-year-old Roshawn White of Hephzibah, Ga.

Officials said he was shot at least once on the 2700 block of Barton Chapel Road. The incident reportedly took place just before noon. He was taken to Augusta University Medical Center, where he died just after 1:00 p.m.

White's body is being taken to the GBI Crime Lab for autopsy.

Investigators said the victim was male, and was taken to Augusta University Medical Center where he died just after 1:00 p.m. The Coroner is working on notifying next of kin before releasing that person's identity.

Dispatchers from the Richmond County Sheriff's Office confirmed to News 12 that they are working a shooting on Barton Chapel Road.

They said the call came in at 11:50 a.m., and it happened on the 2600 block of Barton Chapel Road. Officials from RCSO told News 12 the victim was seriously injured. They said the Criminal Investigations Division and the K9 unit are also on scene. They haven't disclosed if a suspect, or suspects, are in custody or identified at this time.

The Richmond County Coroner also tells us he is headed to the scene.

Details are limited at this time, but News 12 has a crew on the scene. Stay with News 12 for updates.

By the numbers: Latest stats on coronavirus in the CSRA
Related Information