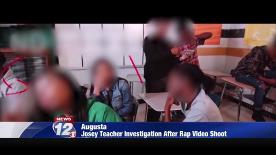 Getting answers from producer of rap video

AUGUSTA, Ga. (WRDW/WAGT) -- The Richmond County School District released the following statement in regards to a music video that was filmed inside a T.W. Josey classroom.

"On January 10th, we were made aware of a music video shot partly at Josey High School. It is not unusual for members of the community to utilize Richmond County School System buildings for religious services, athletic competitions, and other community/private events. The RCBOE Use of School Facilities Policy (KG) states, 'Since the facilities are school sites, no vulgar, obscene, or sexually explicit acts, language, pictures, books, records, tapes or any other similar items or events shall be allowed or promoted on school board property. In renting the premises, the promoter is agreeing that any use of the facilities shall comport to these rules and regulations; otherwise, the shows can be cancelled, stopped and the promoter prohibited from using school facilities.' In this instance, the proper procedures for leasing school property were not followed, nor was the policy adhered to by those involved with the making of the video. As was stated previously, the content of this video is shocking and disappointing, and completely inconsistent with the mission and vision of the Richmond County School System. In keeping with our normal procedures, details of a personnel matter will not be discussed in a public forum."

AUGUSTA, Ga. (WRDW/WAGT) -- If a student said the first line or the name of OP4's song "No F**ks," it could land them in detention.

"That's what makes you say oh oh oh... and then he goes.. OK I had to say all that just so you would listen to this," said music video director Pierre "Liquid Smoke" Luke.

"Really the video is just a caricature of the modern hip hop land scape," said Luke.

You could say Richmond County School System is stuck on the first verse of this song, but they say it's more to do with rapper OP-4 spitting his message inside a T.W. Josey classroom with students clad in cheerleading and band uniforms.

In a written statement the school system says the video was shot "without school permission on school property without prior approval."

"That's not the case at all. We had full permission as far as I know." said Luke. "From the principal on down."

I asked if the students who signed releases were under 18.

The guy accused of opening the door is an ELA teacher at Josey, former Josey teacher of the year and the rappers dad.

"I would hate to see him lose his job for this. He was supporting his son," said Luke.

Josey parent Monique Braswell isn't a fan of the video, but is a fan of the teacher who she says made a mistake.

"He's a good guy. He loves kids. He is very powerful in a lot of kids lives and I just think the location was just wrong," said Braswell.

"I don't think that he should be in this all by himself," said Braswell.

News 12 NBC 26 asked the school system if T.W. Joseys principal knew about the video shoot. A school spokesman says it's all under investigation and they wouldn't confirm or deny.

Mr. Isaac is on administrative leave during the investigation.

RICHMOND COUNTY, Ga. (WRDW/WAGT) -- An English teacher at T.W. Josey High School has been put on administrative leave while the district investigates a music video filmed on school property.

Benjamin Isaac's son goes by the artist name of OP4. They say the third verse of the song points out the ridiculous lengths artists have to go to for attention and that's what they're getting, for the wrong reasons.

The following lyrics are inappropriate for younger children and we advise you take that into consideration before reading out loud or watching the video without headphones.

Click here to watch the video. Again, these lyrics can be offensive and you should consider that if young children are present.

RICHMOND COUNTY, Ga. (WRDW/WAGT) -- An English teacher at T.W. Josey High School is in some hot water after posting links to his son's music video on Facebook.

Richmond County Schools officials say the video was shot partly on campus and without permission.

We can't share the name of the song on-air or online. The music video wouldn't be that big of a deal, but since it was shot on a campus it is being investigated.

Benjamin Isaac's son goes by the artist name of OP4. They say the third verse of the song points out the ridiculous lengths artists have to go to for attention and that's what they're getting, for the wrong reasons.

The Richmond County School System is investigating the matter.

Representatives for the artist say the video was shot in a classroom, but they won't say whether it was at Josey. They also say everyone filmed was of age and signed release forms. The equipment "destroyed" in the video was set to be discarded anyway.

The school seen in the video is Josey High School. We reached out to the district and the Director of Communications and Community Engagement, Kaden Jacobs, provided this statement:

“We were made aware this afternoon of a music video shot partly at Josey High School. The video was shot without permission, on school property, without prior approval, and in violation of Board policies. Personnel involved in the production of this video will be placed on administrative leave during the duration of the investigation. After the investigation, any appropriate personnel action will be taken, including the possibility of termination. We are shocked and disappointed by the content of this video.”

Dozens of moms raising breastfeeding awareness through nurse in

The new James Brown Arena is coming, but what about timing and cost?

Dozens of moms raising breastfeeding awareness through nurse in

The new James Brown Arena is coming, but what about timing and cost?