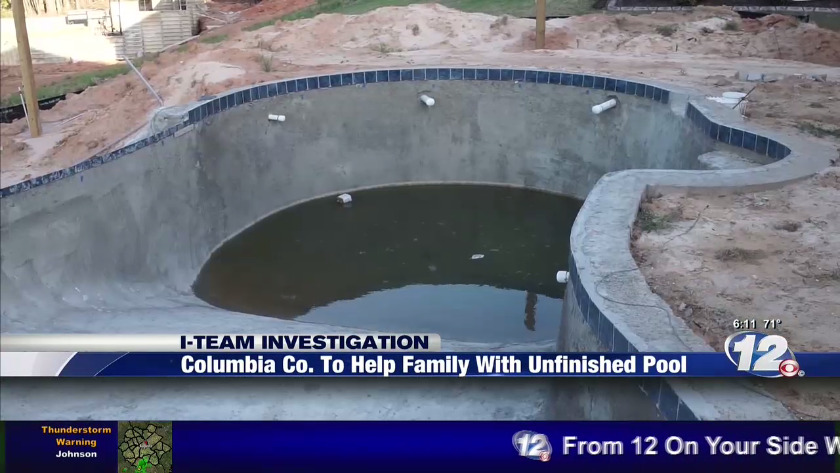 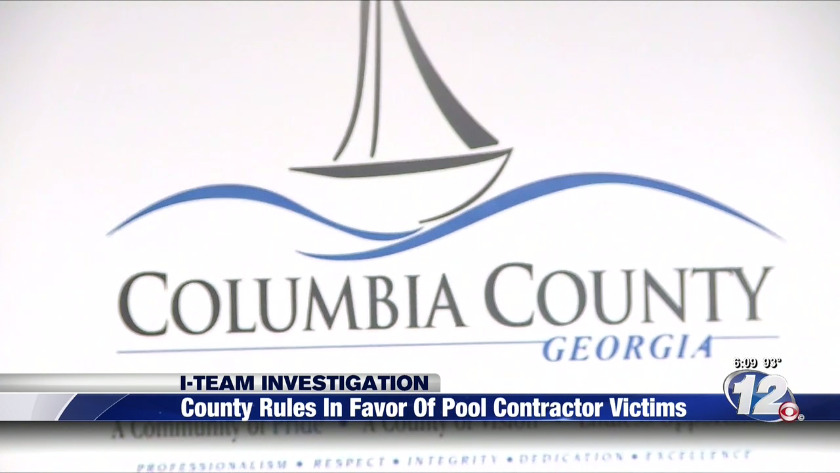 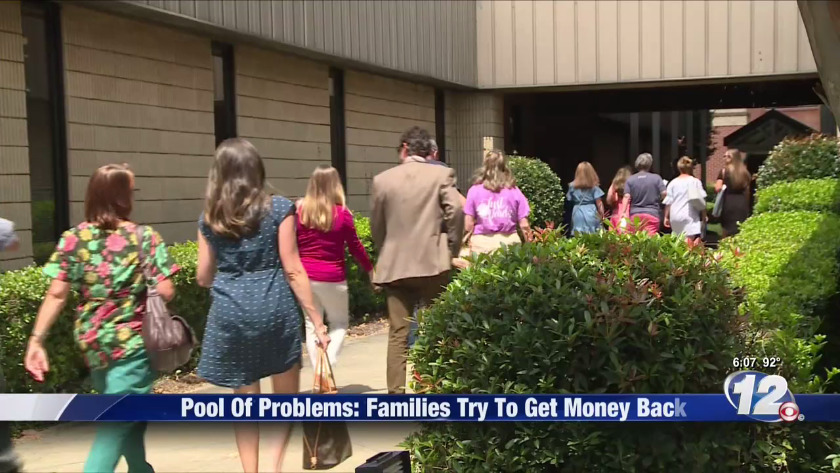 Pool Of Problems: Families Try To Get Money Back

COLUMBIA COUNTY, Ga. (WRDW/WAGT) – The Columbia County Commission will help a family that came to our News 12 I-Team for help over the summer.

When we met them, the Bono family had more than an unfinished hole in the backyard. You could say we also exposed a hole in the system designed to protect families like them. It appeared the County did not know how to follow its own policy in place that allowed for victims of bad contractors to get some recourse and some money back.

At one point, the County had to shut work down in the Bono's yard because Earl Chastagner didn't have permits. After a court date and some fines, he was allowed to continue. He has yet to finish.

The Bonos filed a complaint to the Columbia County Construction Board. Over the summer, the board voted to go after Chastagner's bond money. He appealed, and Tuesday night it ended up in front of the full Commission.

Chastagner was not present at Tuesday's meeting. He was still behind bars in Richmond County after he failed to show up for a court date in Augusta. That was his second arrest this week; he was picked up in Louisville Monday. Officers say he had a suspended tag and license.

Columbia County commissioners voted in favor of the Bonos, giving Chastagner 14 days to finish their pool. After that, the Bono family could recover about $5,000 maximum.

If Chastagner can’t secure a bond with another company, he won’t be able to do business in Columbia County anymore.

News 12 will continue to bring you the latest on this still-developing story.

COLUMBIA COUNTY, Ga. (WRDW/WAGT) -- We have an update to an I-Team investigation into local pool contractors. Earlier this summer, we uncovered a policy in Columbia County that allows victims of bad contractors to get at least some of their money back. After our story, a total of fourteen families filed paperwork asking the County to step in on their behalf.

In August, a dozen of them each presented their respective case to the Columbia County Construction Board.

Late this afternoon, Meredith Anderson confirmed the Board ruled unanimously in favor of each one of those families. Thirteen of them say they are victims of Bruce and Heather Alford of Georgia-Lina Pools. One family claims Earl Chastagner of Great White Pools left them high and dry.

The issue here is bond money. Pool contractors have to secure bond money to do business in Columbia County. Earlier this summer, our I-Team exposed victims have the right top ask the County to have that bond revoked. They won't get all of their money back, but they could get some.

Again, in this case, we've learned the decision was unanimous, but that doesn't mean each family will now automatically get a check. The Construction Board can only make a recommendation to the full Board of Commissioners. Commissioners then have final say. It was supposed to go before Commissioners Tuesday night, but our I-Team confirmed this morning it had been pulled from the agenda to give time for any possible appeals. If no one appeals, the recommendation will be passed on to Commissioners at their October 2nd meeting.

Meanwhile, none of these families say they knew any of these developments. Our I-Team started asking questions after their names popped up on the Commission agenda. Then, late this afternoon, the county sent us the Construction Board's unanimous decision. The families did not know about this, either. As you can imagine, they were happy to hear the Board ruled in their favor.

We'll let you know what Commissioners decide in October.

COULUMBIA COUNTY, Ga. (WRDW/WAGT) -- A dozen families are asking the Columbia County Construction Board to recommend the Commission revoke bond for two pool contractors at the center of an I-Team Investigation.