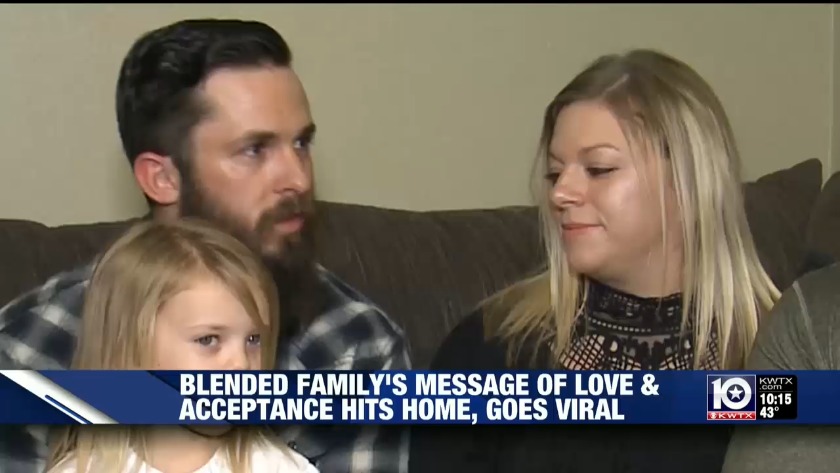 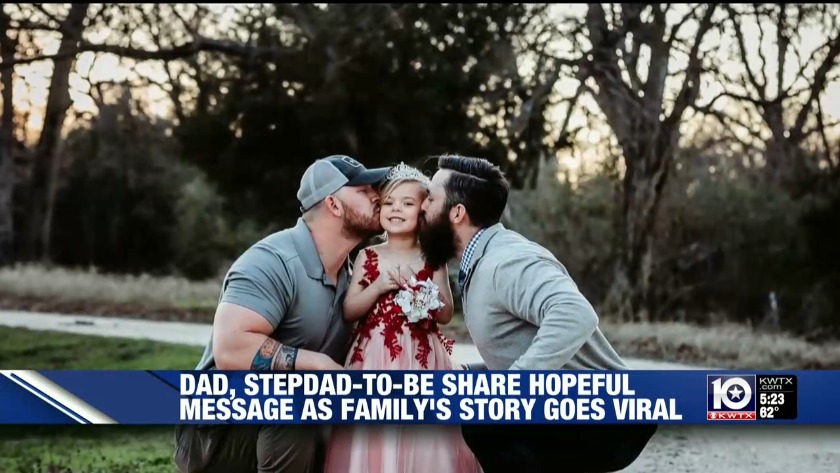 HUBBARD, Texas (KWTX) A blended Central Texas family’s story is resonating with people around the world and has gone viral online after a biological father and soon to be stepdad shared how they lovingly co-parent a precious 5-year-old girl.

The photographs show the two men kissing 5-year-old Willow Mengon on each cheek and embracing her together as Willow left for a “Daddy Daughter” dance in Hubbard, just outside of Waco, over the weekend.

“You know, in the back of my head I thought this is something that should be shared but to the sheer volume it reached, no we never in a million years thought it would go that far,” said soon to be stepfather Dylan Lenox.

Dylan, a 2009 graduate of West High School, is engaged to Sarah, a 2006 graduate of Midway High School. The couple has three children between them; A son Dylan had in a previous relationship and two daughters, one they had together and Willow, Sara’s daughter with ex-husband David Mengon.

David lives in Las Cruces, N.M., but made the trip to Hubbard over the weekend to accompany his daughter on their date. David is actually staying on the couch this week of Sarah and Dylan in order to spend more time with his daughter.

The pictures they snapped together Saturday night as David and Willow left for the dance were not planned, Dylan says, and neither was the message he posted online shortly after.

“We have molded ourselves into one unique family, of only for the sake of our children to know the power of love. When we care more about our children (on both sides of the party) than the way society has taught us to be towards (ex's/baby mommas/daddy's) then walls will fall, life will be free of hatred and remorse, and our children will conquer the foolish "norms" that media has shoved in our faces.”

Dylan admits that co-parenting in a blended family isn’t always easy or without uncomfortable moments but is worth the extra time and understanding it takes.

“The first time I met David, I carried Willow out on my hip for her to get in his truck and the first thing I did was shake his hand and introduce myself and I think it was more out of respect. I respected the fact he was the biological father."

"But even over the weekend David told me, at first, it was especially difficult for him as I lived in the same house with her and she would call me “Daddy Dillion.”

“He was saying It was difficult at first but the more he got to know me and my values and my family it made it so much easier,” Dylan said.

Sarah was also taken back by how quickly their story took off.

“I love these two guys so much. They’re super awesome dads,” Sarah said. “And I’m really lucky. So thank you everybody for following our little story. “

Dylan, Sarah and David say they’ve received hundreds of messages and thousands of comments of support from people looking to find hope in their own situations.

Their advice is simple, they say.

“We didn’t want any type of hatred for our kids. We want them to know about love compassion, acceptance, forgiveness. Those are the best traits of human kind.”

Read the original version of this article at www.kwtx.com.