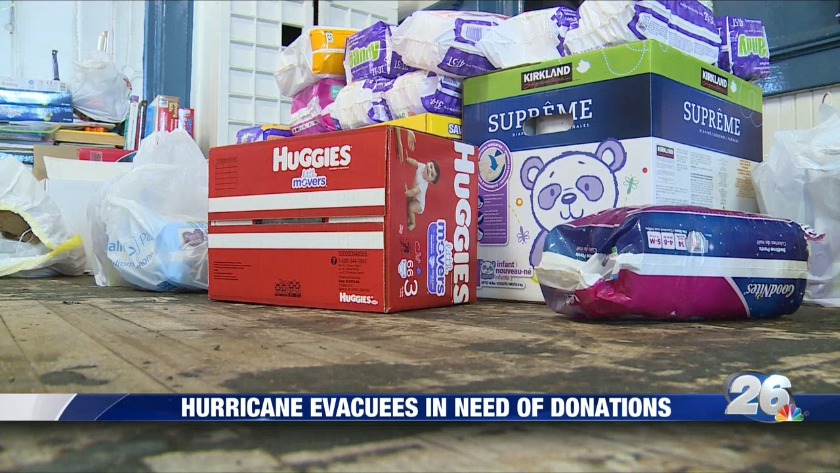 HURRICANE EVACUEES IN NEED OF DONATIONS 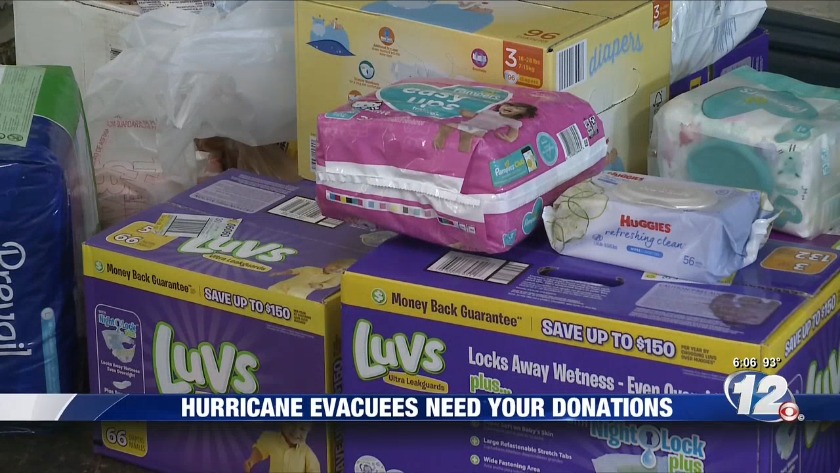 People came through all day to drop off supplies. We saw people bringing boxes and bags filled with different items requested by the fire department.

This was all out of the goodness of their hearts to help those trying to get away from this crazy storm.

"I heard on the radio this morning they were accepting donations for the hurricane evacuees, needed diapers and toys and things like that. So I just felt called to do that," said donors Susan and Tricia Murphy.

Feeling called is what brought Susan Murphy to donate.

For Angela Eunice, it was family.

"I was thinking about my son. What if my son was in that situation? And it actually kind of hurt me," said donors Angela and Willie Eunice.

Officials are asking you to find what brings you to donate. We still have hundreds of evacuees coming to churches and shelters to get away from the hurricane.

"At this moment we have 856 that are here and we have a few more series of buses that are coming in," said Chief Chris James, with the Augusta Fire Department.

Hurricane relief is nothing new to the community, but the fire department says donation numbers aren't as high as years past. But Chief James knows this community has stepped up before, and he expects that it will step up again.

"Augusta has done a great job in the past and I think they'll continue to do a great job at making sure their guests--these folks that are coming in the shelter--are taken care of," said Chief James.

The fire department is accepting donations again tomorrow from 9 a.m. to 7 p.m. If you'd like to donate you can drop items off at 2163 Central Avenue in Augusta.

The fire department told News 12 not all supplies will be used this week but they'll be sending a lot of stuff back with families as they head home.

AUGUSTA, Ga. (WRDW/WAGT) -- You don't have to be a big organization to help with donations that are needed for evacuees coming to our area.

Lots of people in the community have already stepped up to help, but emergency response teams need a lot of supplies to help the people in the shelters.

“We brought some toys and some diapers and some what else? Wipes and different stuff. Baby wipes and things like that,” said Angela and Willie Eunice.

Angela and Willie Eunice were watching the news when they heard a call for help.

So they did what they hope everyone in Augusta will do, they brought items that volunteers will deliver to evacuees in shelters.

“We'll just be praying for the people that's coming to Augusta also. That they'll be treated fairly and right. Augusta will take care of them,” said Angela and Willie Eunice.

Chief Chris James of the Augusta Fire Department says this is the third time in four years, the CSRA has had to step up to the plate.

“Augusta has always done I think an outstanding job of taking care of the evacuees,” said Chief James.

“It feels good that I'm able to do a little bit. I wish I could do more,” said Susan and Tricia Murphy.

And even though they say they wish they could do more it's donations like theirs that can make an evacuee's worst days, a little brighter.

“I think about my granddaughter and she would need all kinds of stuff to do. We didn't bring any iPads though,” said Susan and Tricia Murphy.

They'll be needing donations all week, so if you weren't able to make it out today, you can come tomorrow or even the next day. The address is 2163 Central Ave.

They will open their doors at 9 a.m. and will accept donations until 7 p.m.