UPDATE | Bamberg-Ehrhardt coach turns himself in to authorities 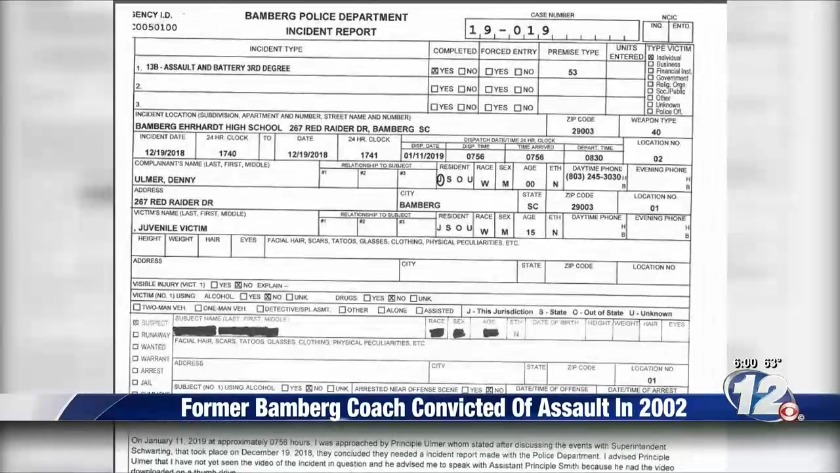 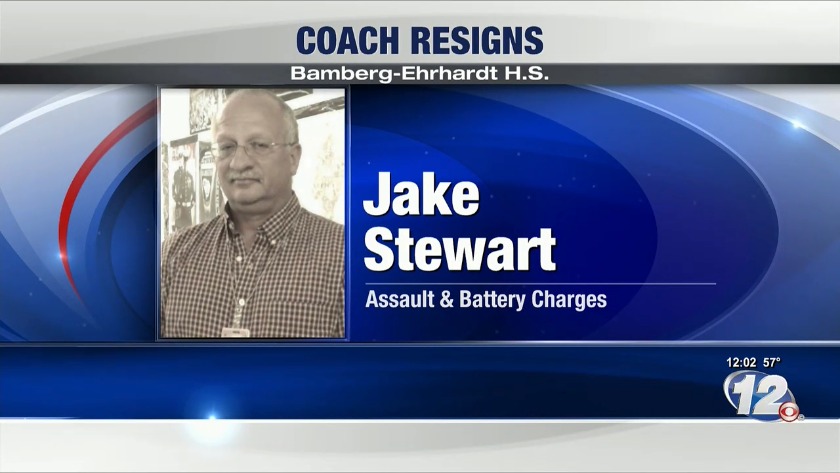 BAMBERG, S.C. (WRDW/WAGT) -- A teacher recently resigned after police saw a video of him allegedly assaulting a student. He was hired even though he was convicted of assault years ago. He turned himself in to the police and immediately posted bond.

Jake Stewart was also a wrestling coach at Bamberg-Ehrhardt High School. News 12 asked how he was hired if he had a record.

According to the state, Stewart gave up his certification after the first assault case but was recertified in 2006.

News 12 asked the school board if they knew about his prior criminal history and their answer was no
.
The Bamberg-Erhardt High School principal filed a report with the police department. It says there's a video of a Bamberg-Erhardt Teacher and Wrestling Coach Jacob Stewart hitting a student in the school gym, something no parent wants to hear.

“It's very concerning, as a mother it’s just horrible," said Tajanique Holmes, who lives in Bamberg.

Charges for assault and battery in the third degree are pending but this is not the first time Stewart has been in trouble.

South Carolina records show he plead guilty to assaulting a high school student in Berkley County when he was a teacher there in 2002.

“They should definitely be terminated, jail should be an option,” said Holmes.

The State Department of Education says Stewart's teacher certification was suspended in March 2002 and then 4 months later he voluntarily gave it up as part of his plea agreement.

That agreement also said after three years Stewart could apply to be recertified. In August 2006 he was recertified and in 2012, Bamberg County hired him.

“You need to know what kind of teachers you are hiring to take care of your kids," said Holmes.

The state DOE says there is even a certification portal system where the district can look at every teacher’s status and history. Schwarting says they always check that when hiring but did not see any red flags. Schwarting also says if they had known about his criminal history, they would not have hired him.

The family tells News 12 the child who was assaulted is a 10th grader at Bamberg-Erhardt High School and he's on the wrestling team. They say he looked up to Stewart. The next court date for Stewart will be in February.

According to an official with the South Carolina Department of Education, Stewart's teaching certification was suspended from July 2002 until August 2006 as part of his plea agreement in 2002.

The Bamberg County superintendent, Phyllis Schwarting, issued a statement about the alleged assault in one of their schools.

On January 7, 2019, which was the day we returned from the holidays, the employee submitted his immediate resignation, which I accepted. The matter also was referred to the State Department of Education, consistent with state law.

The District values the safety and well-being of all students. We regret that this incident happened and wish only the best for the student and his family moving forward. We also want to assure our students and their parents that this employee did not return to work after the incident occurred.

The District will cooperate fully with law enforcement as the matter proceeds.

Stewart had been working for the school district since 2012.

BAMBERG, S.C. (WRDW/WAGT) -- A coach at Bamberg-Ehrhardt High School is facing charges after allegedly assaulting a juvenile in the locker room hallway at the school.

According to an incident report, the school's principal filed a complaint on December 19, 2018.

In a video, the Bamberg Police Department claims they see the coach grab the teen by his collar before slamming him against the wall. The coach then starts talking to the victim, asking him if he understands what he's saying.

The coach allegedly slapped the teen on the right side of his face while holding headphones in his hand. The suspect shoved his hand into the teen's chest and said "put them up". The headphones broke and there was a conversation about who broke them following the altercation.

It's unclear whether the victim was a student.

The coach is facing Assault and Battery charges, but no arrest has been made. The coach has resigned from his position.

News 12 has reached out to the school for a comment, but officials have not responded yet.