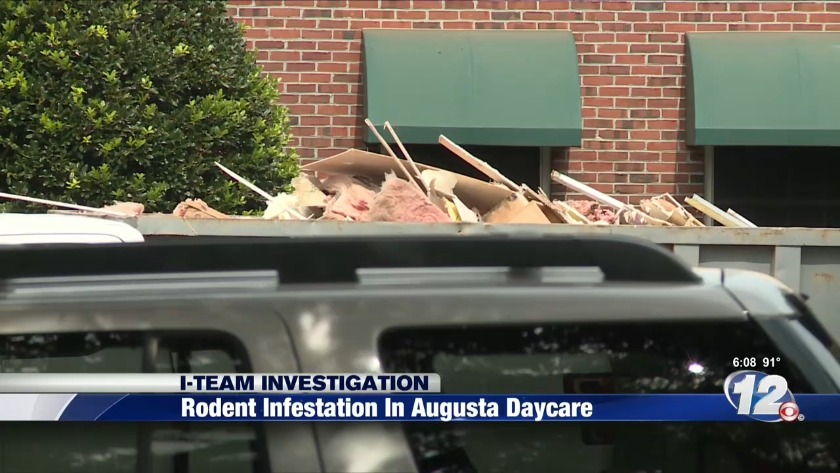 AUGUSTA, Ga. (WRDW/WAGT) – It’s been 16 days since Augusta University’s daycare was shut down due to a rodent problem. Since then, crews have been hard at work clearing the building.

News 12 stopped by the facility Tuesday to check it out, and that’s when we saw crews taking massive amounts of pink insulation out of the building. We also learned the daycare’s director, Nancy Webb, was removed from her position.

Parents tell us that at a small town hall meeting last week, they were told Webb had known about the rodent issue since May.

Since that discovery, parents like Ashley Connell have wondered what took so long to remove Webb from her position. She also wonders how long it’s really been going on.

AU now tells us Dr. Webb has been dealing with the infestation since April. That’s four months before parents found out.

We also discovered at least two fines against the facility centered around a child who was injured. One investigation determined "the center failed to notify parents" that a 3-year-old child "was pushed off a bench", "hit her head" and was "diagnosed with a concussion."

Another investigation determined "rule violations continued to exist", and the center didn't correct the violations.

"I don't know. I am just crossing my fingers that more questions get answered then because I am really concerned for the health of my baby,” Ashley worries. “Was he exposed to something for a long amount of time?”

For now, the center is back open in a new spot on 15th Street while they clean up a big mess. Georgia Decal, who regulates child care facilities, tells News 12 the program is cooperating with local authorities.

The regional consultant and regional manager for Decal were out at the new location early last week to evaluate the new building and provide guidance.

11:00 p.m.
AUGUSTA, Ga. (WRDW/WAGT) -- Augusta University's daycare says they will provide credit to parents for missing this past week.

Last Friday the facility told parents they would be closing due to a rodent problem. A spokesperson says the child care center will be closed for more than a month 'for renovations expected to improve the safety and operation of the facility".

Parents are paying $150 dollars per week for services. They will have to find another place to bring their children until then.

AUGUSTA, Ga. (WRDW/WAGT) -- Last Friday morning, a few hours before parents planned to drop off their kids to Augusta University's daycare, parents got a message saying because of a "rodent problem" the center would be closing for a week.

We asked Augusta University about this and they told us the facility was closed for "extermination, cleaning and repairs" after mice were found in the building.

Things escalated quickly. The child care center told parents this week the center would be closed for more than a month to "improve the safety and operation of the facility."

Several parents are reaching out to News 12 letting us know, on short notice, they are scrambling for childcare and now they're concerned for their kids' health.

"I love the daycare the staff, I feel like they truly love and care about my child and that was the secure feeling I had and now is just, was it an ongoing problem that you have to completely remodel your center. Was he exposed to something and that is you know what I am worried about,” Ashley Connell said.

Parents pay about $150 a week and several parents tell me reimbursements have not been offered.

The university says they are offering parents help with alternate childcare, but parents say most places are booked up.

One parent tells News 12 there will be a town hall meeting for parents at noon and 6 pm on Monday.